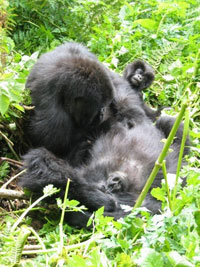 Thousands of Lonely Planet lovers voted to compile the Lonely Planet Awards 2010, showcasing some of the most fantastic places and experiences around the world. All of the winners of the awards have been announced in the September issue of Lonely Planet Magazine.

Categories for the Lonely Planet Awards included the Greatest Wildlife Encounter, which went to the mountain gorillas in Mgahinga National Park in Uganda. Mountain gorillas are some of the most endangered animals on the planet, and seeing them in the wild is a magical experience. To reach the gorillas, you have to climb Mount Sabyinyo, but the trek is certainly worth it. Long trousers and closed toed shoes are a must to keep out biting ants and ticks. The first sighting of a gorilla is exhilarating, and once you are there you feel like you never want to leave.

The Trans-Siberian Railway won the Greatest Journey category, and it’s easy to see why. As the longest railway in the world, it can present a great adventure. The railway passes through Russia, Mongolia and China.

The Greatest Sporting Experience has gone to the Monaco Grand Prix - an event of epic proportions that has been running since 1929. The race track is famous for its narrow stretches and tight corners. Spectators are able to get close to the action as Formula One cars zoom past.

A mouthful of a category is The Event I Would Most Like to Attend in the Next Year, which has gone to the elaborate carnival in Rio de Janeiro. The carnival is a spectacular parade of samba dancers in colourful costumes dancing among fantastic floats. It’s a truly explosive event and one of the most famous carnivals in the world.

There are many other awe-inspiring categories in the Lonely Planet Awards, which are sure to inspire travellers with an adventurous heart.