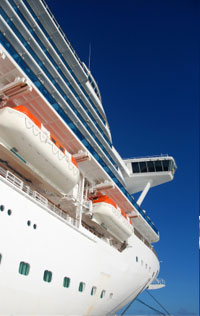 Luxury cruise liner Carnival Splendor was stranded at sea on Monday when a fire caused damage to the engine room just off the coast of Baja California. The cruise liner, which is only around two years old, drifted for some time before a tug boat arrived to help pull it to shore.

After the fire broke out Carnival Splendor was left without air conditioning or hot water. US Navy helicopters were called upon to transport supplies to the cruise ship passengers, which consisted of cold food items including Spam, crabmeat, croissants and Pop Tarts.

Originally the plans were to drag Carnival Splendor to safety in Ensenada in Mexico, but the cruise liner’s destination has now changed to San Diego. A second tug boat has arrived to assist with the rescue mission.

The cause of the fire on the cruise liner is unclear. Thankfully no one was injured in the fire. When Carnival Splendor arrives in San Diego, arrangements will be made to transport them all home, and they will all be offered a full refund along with a complimentary future cruise.

Carnival has cancelled their next cruise that was due to depart from Long Beach on 14 November. Anyone booked on that cruise liner will be offered a full refund and 25% discount on a future cruise.

Cruise passengers on board Carnival Splendor were barely able to enjoy any part of the cruise as the incident occurred on the very first day of their journey. They were gearing up for a weeklong cruise of the Mexican Riviera when disaster struck.