Airport body scanner to be installed at Manchester Airport 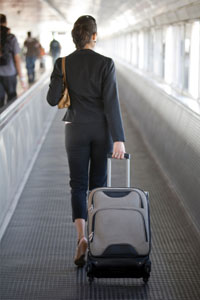 Manchester Airport conducted a survey amongst its air passengers to determine their thoughts on installing an airport body scanner to replace full body pat downs. The response to the survey was overwhelming — a whopping 95% agreed to the installation of the airport body scanner.

As a result of the positive response, work will now begin on installing a body scanner at Manchester Airport’s Terminal 3.

Manchester Airport began trialling the airport body scanner in 2009 after they received a large number of complaints from travellers regarding pat downs at security. By testing the scanner, they hoped to dispel any rumours about the technology’s safety and studies have proved that the technology is perfectly safe.

Some travellers will be concerned about the affect of the airport body scanner on their health or how it might violate their privacy. Travellers with medical conditions might be particularly concerned, especially those with hidden prosthetics. The managing director of Manchester Airport, Andrew Harrison, has assured the public that scanned images will be dealt with confidentially.

He said: ‘We fully respect that a small number of people have reservations about body scanners on privacy or medical grounds but we have gone to great lengths to ensure the highest levels of privacy protection and expert studies have shown that the technology is safe.’

The installation of an airport body scanner will make the queues at security move much quicker. Scanning only takes 25 seconds, whereas pat downs can take up to two minutes. Also, travellers won’t need to take off coats, belts or shoes before entering the scanner.

Millions of travellers pass through Manchester Airport every year, and for most of them, the body scanner will make for a swifter, more pleasant experience through airport security.